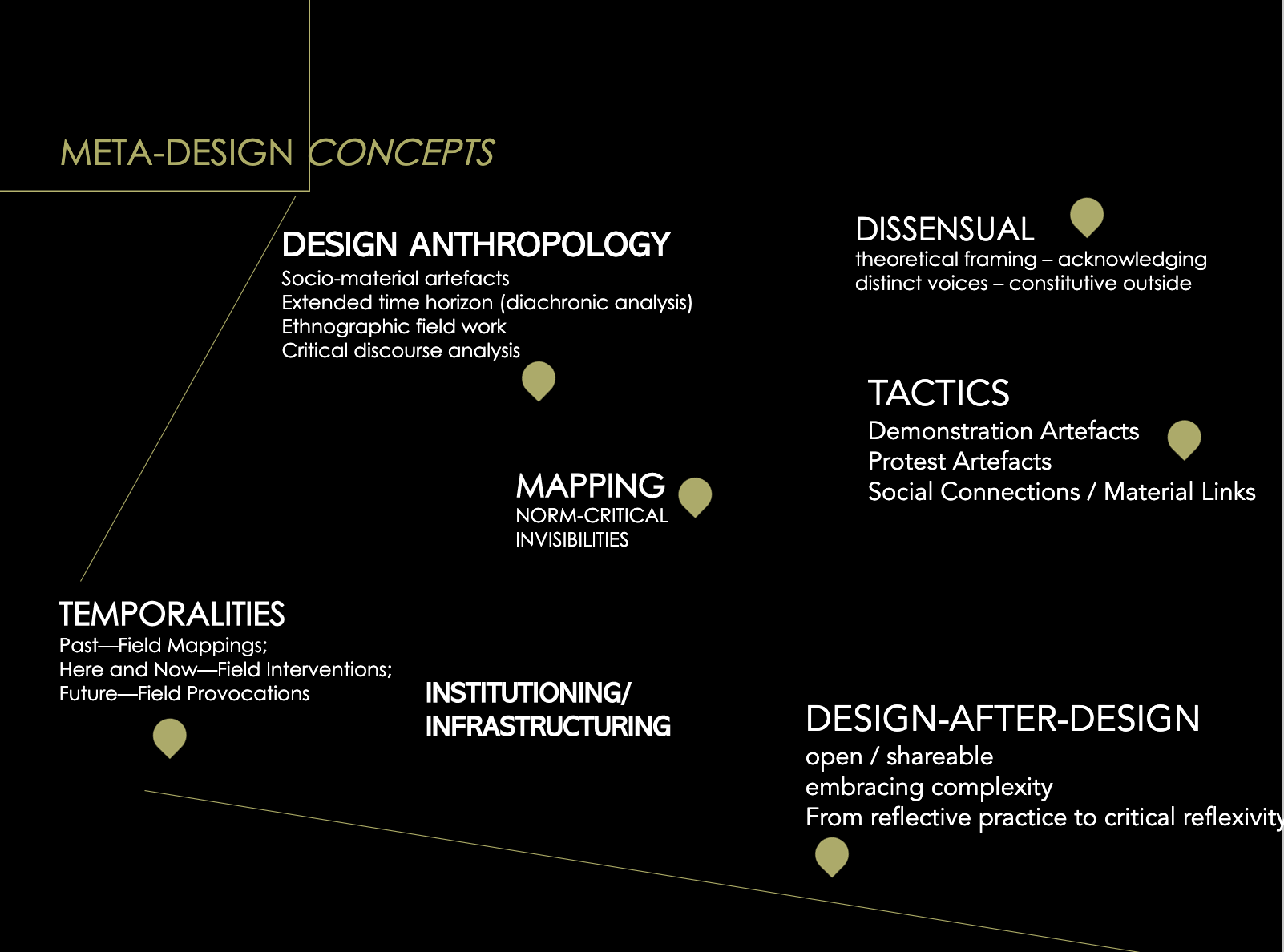 Posted at 10:44h in Blog by Pandora Syperek

In November Counter-Framing Design held a seminar session with senior lecturer Torange Khonsari’s Design for Cultural Commons MA at London Metropolitan University. As co-founder and director of the critical art and architecture practice Public Works, one of our project partners, Torange is an advisor on the Counter-Framing Design project.

Sharing our project vision – to understand the relationship between socio-political framing and strategic action in the field of sustainability to develop a novel design approach to support design for social change theory and practice – we set out our meta-design concepts: design anthropological methods, working within an extended time horizon, mapping practices and design tactics. We outlined the field of grassroots organisations and issues comprising the new economics with which we are engaging, including creative commons, universal basic income, decarbonisation, migration, housing, land stewardship, solidarity and transitions movements, the repair movement and sustainable arts and culture. This was followed by an analysis of the competing frames we have identified within the field, which form the basis of our critical discourse analysis.

We homed in on the frames and counter-frames of ‘the New Normal’ and debates around going back to normal, when the pandemic has revealed such profound structural inequalities – where does this position the rhetoric and campaigns to ‘build back better’? Similarly, we considered tensions between criticisms of climate injustice and the whitewashing of the environmental movement, with calls for unity and to overlook differences to come together in an age of division. While the ‘counter-frames’ at the centre of our research include intersectionality, decolonising, Indigenous worldviews, anti-capitalism, sociocratic models, radical openness, storytelling tactics and green recovery, between these frames exist points of conflict and tension.

To consider visual and material as well as textual aspects of discourse, we looked at these frames in the context of a case study: Extinction Rebellion. XR has an interesting relationship to our counter-frames, as its aim is to normalise mass civil disobedience, and it has received criticism for a lack of intersectionality within both its membership and its methods, despite (or perhaps, in part, due to) its decentralised, self-organising structure. The movement is particularly relevant to our project, as it arose out of research in organisation design as a practice of subversion, and its widespread success has largely been down to its strong design principles, including its name, its famous logo and its uniquely embodied and replicable protest actions (think: the Red Brigade), readily likened with Anne Thorpe’s design tactics.1 Extinction Rebellion refused to be included in the 2019 Beazley Designs of the Year awards, as it accused the Design Museum of ‘artwashing’ the insurance company’s activities.

It was useful to think with Torange and the Cultural Commons students and their material and aesthetic practices, engaging with topics ranging from chemical and noise pollution to use of communal spaces on a council estate and facilitating children’s communication through design. We discussed how actions can intersect with and support emergent frames in grassroots organising around the concept of a new economy, and where they might conflict. Design has traditionally ‘re-framed’ problems without challenging underlying hegemonic epistemologies that can undermine progress on sustainability, but critique is necessary to establishing alternative ways of building this ‘new economy’. In a similar way, the commons can function on assumptions of privilege, both in terms of capital – the expectation of free labour – and aesthetics – ideals of rewilded greenspace, for example, often suit the tastes of a certain demographic. Yet, at the same time, we recognised the need for synergy between different groups, while asking, à la Chantal Mouffe, is consensus even feasible, or indeed necessary?2

Such debates will continue to inform our project as we proceed with design research methods that are diachronic, norm-critical and dissensual.  The session gave us an opportunity to consolidate our research to-date, before we enter our next stage of field work with project partners Public Works, Citizens UK and ECHO. We were also able to trial some of our initial findings and design concepts in advance of the design anthropology workshop we are planning for the New Year. This workshop will use design concepts of mapping to convey and initiate a discussion on the relationships, tensions and contradictions between the range of frames that we identify in the field.